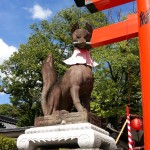 #GrandtourofAsia two months of the good, the bad and ugly

I’ve been told before I should start travel blogging, and there might be some logic in that but likewise well…I haven’t, but here’s a summary of 2 months in Asia.

Upfront experiences may not be typical for everyone; the trip was done on a strict budget using discount airlines (Asian discount airlines are AMAZINGLY CHEAP) although I did have some leeway during the time, and fortunately I was still working on the road and getting paid. Traveling alone also is different to traveling as a couple or in a group; there were definitely places I visited that would have been a lot more fun if I hadn’t been doing it alone.

It’s amazing how much you can save when all your bills for a month (phone, utilities, accommodation, internet) all cost for a month in Chiang Mai what it would cost less than one week in Melbourne, and that’s the rent alone, if you added the other bills you’d be lucky to pay for 2 days in Melbourne.

But I digress…the Grand Tour of Asia 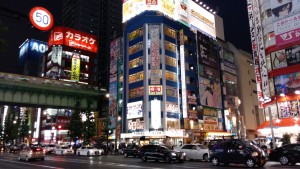 Perhaps I had far too high expectations of Japan as it’s a country I’ve adored since I was young, even to the point of spending three years learning Japanese in high school, because of all the places I visited during the trip it was the biggest disappointment. I didn’t hate it, I could see myself going back again, but I’d do it differently this time.

Probably my favourite part of the trip was catching the Shinkansen, which I used to travel to Hiroshima from Tokyo, then back up to Osaka. I can’t recommend the JR Rail pass enough, it doesn’t just cover the Shinkansen it covers all JR Rail trains, and while you pay for the subway trains, just about everything else is covered by it.

It’s a mind fuck in terms of how big the place is, and various parts of it didn’t disappoint. Akihabara and the people dressed as Anime characters, the bright lights, the atmosphere in places. Trains that are amazing.

I saw various other things, visit markets, palace grounds, and other things, but maybe I had a bad run there for two reasons: it rained all but the last day I was there and it was cold (never went past 21c..in the middle of summer) and where I booked on Airbnb was very handy for transport, but it was a quieter part of town (very central, as in walking distance to Ginza, three stops to Akihabara, one stop to Tokyo’s main station) and it just made me feel a bit isolated even if there were various convenience stores and the odd eating place spitting distance away.

On the trains Tokyo is so big it just looks like the same scenery going on forever as well…probably a place I would have enjoyed more if I wasn’t by myself.

Of note, and this applies for all of Japan, English with the locals is extraordinary poor. The counter to that is that well, it’s their country, they shouldn’t have to speak English, and that’s fine, but English has become the linga franca globally when it comes to tourism and Japan is hosting the Olympics in 2020; they’re going to struggle with it because about the only thing you’d find in English is train signs. 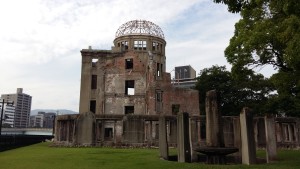 My highlight of the places I visited in Japan.

Perhaps it’s because it’s not so big (1.9m people for memory)  it’s more manageable, but unlike the big cities of Japan it also had a soul and a feeling about it as well that you could feel being there.

The history around where the atomic bomb dropped is something I will never forget, and it’s done extremely well.

Tram system in town dead easy and cheap to use, and compared to other places in Japan accommodation was really cheap as well.

My only regret with Hiroshima is that I was only there 3 nights, I’d wish I’d spent a week or two.

Osaka is theonly place I have no interest in ever visiting again in Japan.

It’s a smaller version of Tokyo with next to no soul. Bland mid-high rises as far as the eye can see, shitty subway where none of the stations match up when you change trains, and the “tourist” attractions did nothing for me.

I only did a day trip to Kyoto and the little I saw was pretty and I should have spent a week there instead of Osaka. 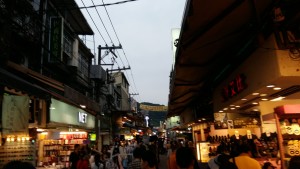 I spent the week in Taipei and it remains the biggest surprise of the trip. I don’t know if it’s because I knew little about the country other than they made tech stuff, and I wasn’t even going to go originally but I saw some posts about it on Facebook and the flight from Japan was $70 so I thought bugger it.

For anyone who has been to Asia I’d describe it as Bangkok 20-30 years into the future, for others it’s a modern, up and coming city. Nice relaxed vibe to it yet everything you could ever want.

Cheap….so cheap for everything, basically Thailand prices. Brilliant subway system that was like $1 a trip, interesting things to see, English was reasonably well spoken, and the weather and people nice.

One thing I would note is that they don’t get a lot of Western tourists, and it was rare to even see another white person in Taiwan. Indeed customs at the airport questioned me as to why I was visiting because I doubt they see many Australian passports come through.

I’d happily visit again tomorrow, although it would appear to get fairly cold there during winter. Two regrets: I didn’t stay there long enough, and I would have liked to (given the extra time) explore the Island some more.

If you’re looking for somewhere different to visit in Asia where not many people have gone before I can’t recommend Taiwan enough. 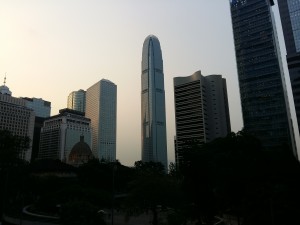 I had been to Hong Kong before, be it on two long stopovers (one overnight) so I had somewhat of an idea of what to expect, and I wasn’t disappointed.

Caught up with some good people while I was there, and later found out I missed some other people I know as well; amazing how many Aussie expats base themselves in Hong Kong.

Putting aside that I made the mistake of booking into a “hotel” (the word is used reservedly) in Hong Kong’s only slum Chung King Mansions (rectified after I walked out of the booking two days in) the whole place is vibrant, interesting, busy (but not as mad as Japan), rich…I could go on. If you’ve never been there before I’d highly recommend it.

My only possible gripe is the cost: accommodation was significantly higher than even Tokyo (which is considered expensive, I didn’t find it was particularly) and everything else isn’t on the cheap side, although like anywhere on the planet, it was cheaper than Australia.

I could see myself living there, but I don’t think as a humble tech journalist I could afford to, or if I did it would be a struggle watching budgets etc..

No question as to whether I’d return

A day trip on the ferry, visited some casinos.

Pleasent enough place but there were parts you could have fired a cannon along a street and not hit anyone. The rumours that the city is in trouble post Chinese corruption crackdown are true, very, very quiet. Wouldn’t mind going back though for a longer stay. 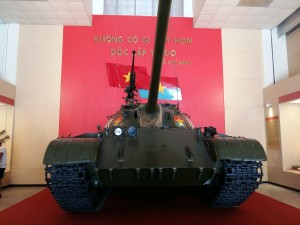 Third world developing shit hole comes close. This is a town where garbage disposal consists of throwing rubbish onto the street, there are no traffic lights so crossing the road is the most frightening thing I’ve ever experienced (you kind of get use to it, but it’s still nuts) and you’ve got to make sure people aren’t trying to rip you off.

That said, OMG the food.

Fresh, delightfully cooked meals for peanuts. I was ordering fresh Barramundi (Asian Sea Bass, it’s the same fish) never been frozen, presented on a plate with some vegetables and a sauce, for $4. In Australia fresh barra (not the frozen crap you get most places) would start at $50 a plate if you’re lucky, and head towards $100.

Other food as well, Pho, Bahn Min, you name it: next to nothing in cost.

The only possible way I could recommend Hanoi though is that you’d go for the food ONLY if you could handle the fact that the place is terrible. 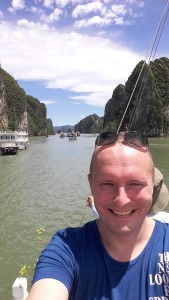 A day trip well worth it. Gorgeous place, decent enough boat tour in around the rocks in the bay, and I’ll forgive the scum bags at my hotel for charging me US$45 for a tour that costs US$25.

Possibly the only reason I could see that you’d ever want to travel to northern Vietnam.

I’m actually writing this from Saigon on my last full day in Vietnam after 2 weeks in the city, and I’m still not 100% how I feel about it.

Compared to Hanoi it’s literlaly like being in a different country. Streets are fairly clean, footpaths, beautiful colonial architecture, traffic lights (but you have to be careful for bikes who ignore them), great eating although with the note that it’s no where as cheap as Hanoi but still cheap in the scheme of things.

There’s a lot to like about the place, let alone me discovering my favourite Australian bar in Asia, and I think I could live here, certainly there would be no problems cost wise in doing so, but the reason I’m not 100% is that there’s a couple of little things: street touts, noisy traffic (everyone constantly uses their horn,) and like Hanoi you have to watch for rip offs particularly with change that has happened 3 times since I’ve been here where they try to short change you by confusing you with smaller denominations of notes; you could live with it but more so than other places I’ve been people aren’t honest.

It sort of reminds me of Brisbane: parts of it are modern, somewhat relaxed vibe, but there’s boring parts as well.

And now back to Chiang Mai until the end of the year to plot further adventures for 2016.