We ran a story earlier today on the name and public details of the alleged Churchill fire arsonist. We didn’t run his picture due to the gag order in place on his picture and address in Victoria (the gag order was lifted on his name), despite The Inquisitr being hosted in the US. No idea whether we were free to do so given where the site is hosted (I’ve heard arguments on both sides), but I didn’t think it was worth getting into a possible legal argument over. On the shot of his MySpace page we took, we purposely blanked out his image.

So this is seriously WTF. We’re in Google News as being based in Victoria, so maybe Google put in place something to be on the safe side? I just don’t know. 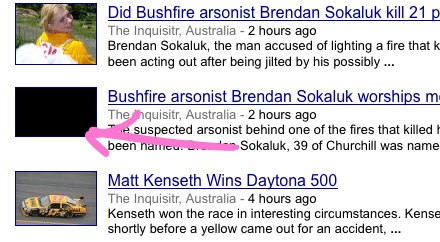