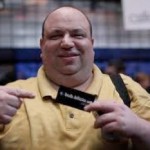 In Memory of Allen Stern

I received news today that I didn’t expect, that one of the guys I absolutely adored, both for his energy and honesty had passed away.

That guy was Allen Stern.

I tried to log into iPhoto tonight to find a picture of him back in the days I’d first met him: I know I have pictures of him, but ironically iPhoto keeps crashing. I’m not superstitious, but maybe iPhoto knows, and it knows that Allen would always wanted to be remembered for the life, vitality and amazing person he was, vs some photo I’d taken back when I was at TechCrunch (sorry, I stole the above pic from someone… he would always tell me you’ve got to have a pic in a post after all. )

When I first met Allen I wasn’t sure. Michael Arrington had him marked as a potential competitor at CenterNetworks, but as long as he linked to the TechCrunch stories there we’d allow him to attend TC conferences.

After some initial trepidation I actually got talking to the man, and a man in the truest sense he was.

I reckon I met Allen maybe 4-5 times in person, but that was enough that in the last 7 years that I could honestly call him a friend and at times a confidant.

He was a guy who I could bounce ideas off, and he would bounce ideas off me. He bounced many of his latest sites of me, and asked for advice, which coming from him was always a compliment, but likewise he’d known that I’d gone away from serious tech and was trying to enjoy myself.

When he walked away from tech blogging he came to me about selling the site, and we also talked about pitching his new sites as well. We didn’t talk far enough (sometimes 10 times in a week, other times once a fortnight) but I do say that never expecting him to leave us. My only regret now he is gone that I didn’t speak to him regularly enough..we were like friends who spoke epically when we were doing something, and then only share the odd thing in between. He’d helped me as well on SEO and similar in the past.

In the end I knew Allen loved tech as I did, but likewise he hated all the drama and politics around it.

Some of the best (be it via email) conversations I’ve had in my life came from Allen. I could have made him an honorary Australian because he got sarcasm, he could take the piss out of others, and he was honest to a tee… and that included again his opinion. That may not have made him broadly popular (I always loved CenterNetworks, but it didn’t work in the US) but meant that every day he lived his life he was a far better person than so many other people I know in the United States in particular. I promise I’m not having a go at Americans but my experience in the tech blogging/ startup community was all PR and falseness (I’d hope that my calling some of that out is why I was popular at TechCrunch.) Allen didn’t give a shit, and that’s why I came to love him as a person and writer.

Allen will be sorely missed, and I know not just by me but his family, friends (including Louis Gray, who I shared a friendship with, often together) and others who came to appreciate a big guy with a huge heart who spoke as we all should: honestly and from the heart.

This was a guy full of life who recognized his mortality, and gave it a shot to fix things. That he didn’t make it…well, it’s a fear of not only me but I’d guess many people reading this.

Vale Allen Stern, you were and should be an example to many other bloggers to come. You were honest, friendly, and called it like it was.

I’m an atheist Allen Stern, but lets pretend for a second you are up there looking down: thanks for being mate. I will never forget you.