The Inquisitr Books a Record Month

It’s been a while since I’ve done an update on stats for The Inquisitr, but a great month is always a good reason to share. We’ve floated in the 7-8m pv range for maybe the last 6 months or so (maybe longer, I didn’t check) and with the exception of Feb 2011 where we were just below 7m pv (28 days… with another two days it wouldn’t have been an issue) we’ve done well.

The good news is that in March 2011 we finally broke the 8 million page view mark, and we’re getting closer to breaking the 2m unique visitor figure as well. Indeed, in many ways the unique figure is possibly better again.

The good stuff from the breakdown: the biggest post only accounted for 1.63% of the page views, and the biggest posts after that 1.44%, 1.32%, 1.26% and 0.96%. In the early days we often relied on a couple of huge posts to get us up, today the traffic is well distributed across many many posts.

Another Month With Win

My thanks to the team as always, without whom this wouldn’t be possible. Now lets not mention the ads though: July=northern summer= not good, but we’re getting closer to the good ad months now. If we can keep the traffic up coming into Oct/ thanksgiving/ xmas…. 🙂

So our traffic has finally gone through a growth spurt, headed primarily by a big jump in pages per visitor after installing Facebook commenting (see graph above.)

But the jump isn’t reflected in any of our public stats, including Quantcast via direct tracking. Note that our internal stats are backed by GetClicky, GAnalytics and Technorati Media…that is, we know this isn’t a mistake. 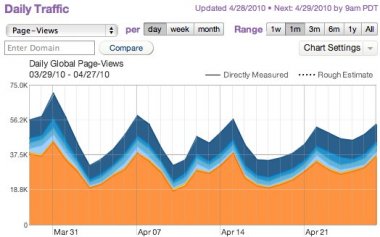 What gives? I know there’s a focus on uniques with these services (and our uniques are fairly steady) but both views are page view views.

And in case your wondering why I love Mark Zuckerberg at the moment….

Just a short admin note for The Inquisitr: we’ve recently terminated one of our syndication deals. I won’t go into the details, however I wish the company involved future success, and although the product wasn’t working for us, I still like what this company does as a competitor to AP, so I’ll still be cheering a bit for them.

What that means is that in the last 2 weeks we’ve had a significant drop in posts on The Inquisitr. Roughly 7-10 posts a day. It means we’re not covering as much general news stuff as we were.

I’m not sure quite yet as to whether this is a good or bad thing. It’s less to read, but likewise it may also help our original content stand out some more.

It does mean though that we are short in some categories, particularly science and health (and we had to delete the old content from them as well per the termination of the deal.) I haven’t made the call yet, but we might fold science and health into a sub-tech category going forward vs remaining stand-alone.

Not ready to hire or expand again until we get out of the first quarter ad slump (there always seems to be one this time of year), so we’ll wait until at least mid April to review.

We will fight them on the beaches: Inquisitr Stats Update

I haven’t done one of these in a long time.

The last I can recall (well… Google) was for May last year (link.)

In that time we suffered the great server problem of 2009 (it’s probably not completely unrelated that less than a month after the worst was over (and it went on for months) I lost my marriage), we’ve seen highs and low, good money months and not so good.

The good news is that today we remain on track, although we’ve never quite broken through the targets we once set ourselves.

Our stats since May run between being 20k short of 3m pv, and 60k over 2m pv, and everything in between. Our income ranges from just scraping to be profitable, to having a record month, and a following month that I won’t complain about at all.

Despite my personal issues at home (see above) the team has stuck by me despite days where I occasionally struggled to function, and I can never be more grateful.

Indeed, if there’s one highlight over the last 10 mths is (mostly) how stable the writing team has been.

January was particularly slow for us, but we still managed to keep things over 2m pv, and we started to pick up in the last week. $ Stats this year (after a bumper Nov-Dec) are down (as they were the same time last year) but the balance is better now: even in a rough month we can still break even, and even afford a small payment to me. Despite the personal issues, I’ve started trying to balance out the good and bad months in accounting to allow for both, and it’s starting to work well; even if we start going backwards (unlikely, we’ve never booked an actual loss since Dec 08) we’ve got a permanent buffer now, and we’re not losing money, an important consideration.

We’ve had a problem with an external content provider that remains unresolved at the time of writing, so change might be afoot there, but the rest goes well. Hell, we even had a writer at CES this year covering stuff for us, and that to me was one of the things I always wanted to do.

Our head count sits at 6 + 1 occasional writer + 2 assistants (one who posts syndicated content, one who does admin) = 9.

I’ve always had visions of expansion but given the non-site issues I’m quite happy to continue sitting where we are now, at least until I get fully back up on my feet. We’ve turned around a minor slump, are focused going forward, and there’s no reason why we can’t get back to passing the magic 3m pv goal and beyond. For the next 6 mths though, it’s a conservative ploy, but who knows.

Hopefully the team is happy, and although I have my days, I’m still one of the luckiest guys in blogging, and a lot of that is thanks to the team. Every now and then I still can’t believe we do what we do, but we do, and although we might not be the biggest site, we power on and we’ve carved out our space on the internet, for better or worse.

Back In The Top 10 Australian Startups

When Kim Heras moved the Top 100 Australian startups to Younoodle, we completely disappeared, not helped by the fact that we didn’t even have a Younoodle listing.

New year and finally we’re back in the Top 10. 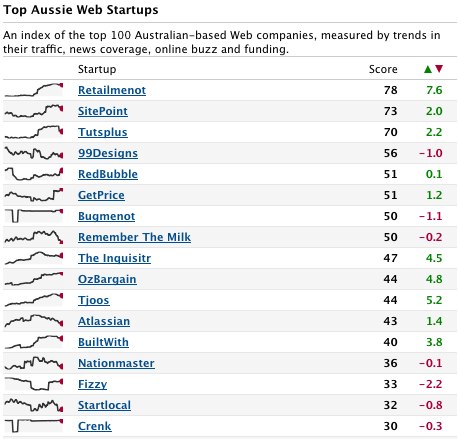 There’s been lots of lulz following my reply to Media140 a couple of weeks back, but the best came from one person who claims that The Inquisitr is a scrapper site who copies and pastes content that isn’t our own.

Let me say up front that roughly 20-30% of our content (sometimes less) is most definitely copied and pasted.

But here’s the fact that is left off that allegation: we pay for that.

That is, we pay to syndicate content from AllHeadlineNews and Bang Showbiz.

Far from an issue that apparently calls The Inquisitr into some sort of doubt, those deals actually represent our maturity as an online news source, in that we happily pay to compliment our original content…just like Newspapers do.

Going forward, I also won’t rule out that we won’t sign more of these sorts of deals: it’s not as if they replace what we do in house (which drives most of the traffic), as opposed to compliment it (and particularly help us achieve most days 24/7 content.)

Naturally we’d love to bring on new writers, but likewise money is like a rollercoaster of late (not helped by the GFC): we have never booked a loss since December last year, but likewise some months are spectacular vs others.

The positive note is that going into December that November is on track to be our best month $ wise on record, be it not the best traffic month. Half time of year, half focus (particularly on tech.)

If some doubt me, ask our suppliers, or see our long standing text on the copyright page here 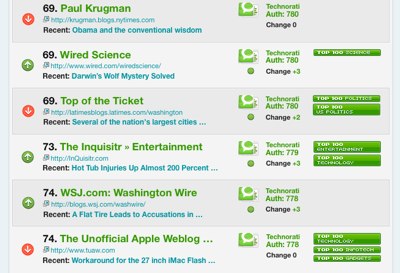 Benchmarking after the storm

In case you missed it: It was the best of times, it was the worst of times (or why we’re with Rackspace)

I don’t want to revisit again what happened, but suffice to say we had our worst day since maybe month 2…and the first week of the month (and September in general, but not as bad) was epic fail.

Now on Rackspace so benchmarking load times, and doing everything I can to make the site as quick as possible.

As I type this, the front page loads in 9.57 seconds, and give or take the time its loaded it’s sometimes faster, sometimes a little slower. The bulk of the readable content though is up <6 seconds, and that’s a huge improvement.

Posts are an issue. Content is up <7 seconds but the full page is way too long (18s). The biggest problem is JS-Kit, and loading icons for each comment, for example hits to FriendFeed for icons can add 5-10 seconds to load time. I’ve asked them for the option to cut the icons out, crossing fingers.

The choice of the two was important because both are on Rackspace…and we beat them, despite less resources. We can do better though, and we will 🙂 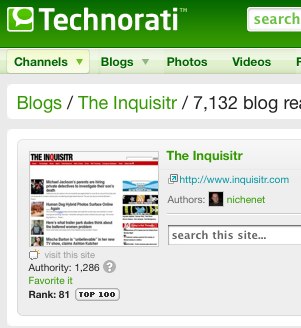